Make food fun with these Beyond Meat Chicago-Style Mini Pizzas! They have all the flavor of
a full-sized pie, but in a tiny package. They’re great for kids and the whole family! 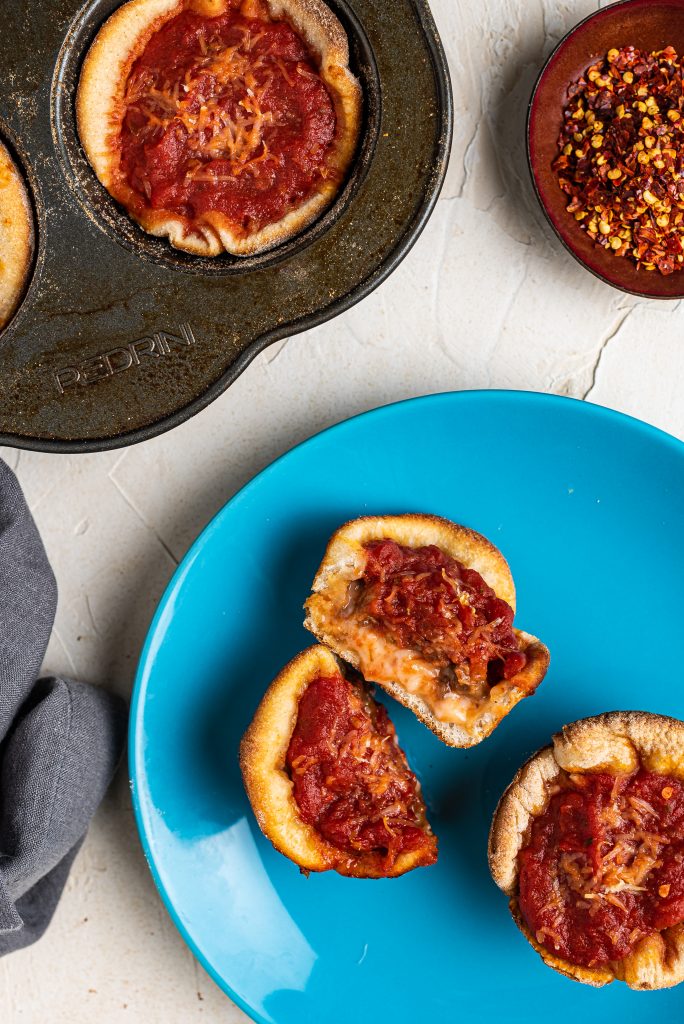 A while back I took a poll in Instagram as to what recipes people would like to see on the site in the upcoming weeks. One of the big winners was cookies, which I’m happy to whip up, even though I’m not much of a baker (that’s why you probably won’t see me posting any bread baking stories on Instagram). But what everybody really wanted was pizza. And I can’t say I blame them! Now more than ever, comfort foods like this are essential. So I give to you these Beyond Meat Mini Chicago Style Pizzas.

This is hands down my favorite type of pizza. I love the thickness, and the upside-down ingredients are just fun to me. To make this even more fun I skipped the usual cast-iron pan that Chicago-style pizza recipes call for and broke it up into six mini pies—made in a muffin tin. The recipe is super easy, too, and calls for only a handful of ingredients and fifteen minutes of baking time.

Dough: A good pizza starts with the dough. And there are a lot of great recipes out there (like this one from Forks Over Knives). But to keep this recipe as easy as possible I went with Pilsbury’s Classic Pizza Crust.

Whatever dough you go with, you’ll want to roll it out and cut out five-inch circles. (I used a 10-ounce ramekin to cut around—it’s about four and a half inches, but when rolled it spreads out to roughly five.)

Vegan cheese: Whatever your favorite plant-based mozzarella is will work just fine. I went with VioLiife shreds because to me they’re the closest thing to real that I could find.

Vegan sausage: Chicago-style pizza needs sausage, right? I used Beyond Beef, which I guess isn’t really even a plant-based “sausage” as much as it’s “beef.” But I love the stuff and it works well because it’s crumbles. The Beyond Sausage could work, too. But because of the small amount of space, you’d have to chop it very fine. You can use whatever plant-based protein you like, too.

Sauce: For this I just used crushed tomatoes with a little oregano and some red pepper flakes stirred in.

Vegan parmesan: This is optional, though I think it really does add to the recipe. Again, I used VioLife brand. Nutritional yeast makes a nice substitution if that’s all you have on hand, too. 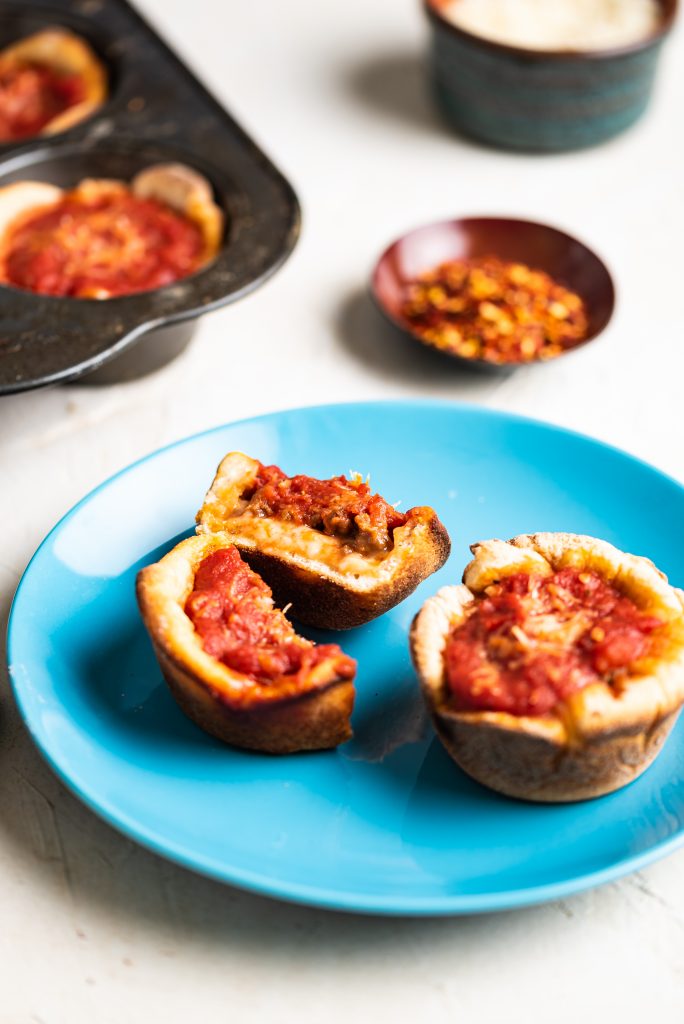 This recipe couldn’t be easier. You just brown the “meat,” mix the sauce, cut out the dough and layer everything in the pan. Then the pizzas bake for fifteen minutes and you’re all done!

If you love Chicago-style pizza as much as I do you’ll flip for this recipe. It’s great as an appetizer, a party hors d’oeuvre or just a really delicious snack. And they pair well with some Kombucha Sangria as the warmer weather approaches, too! 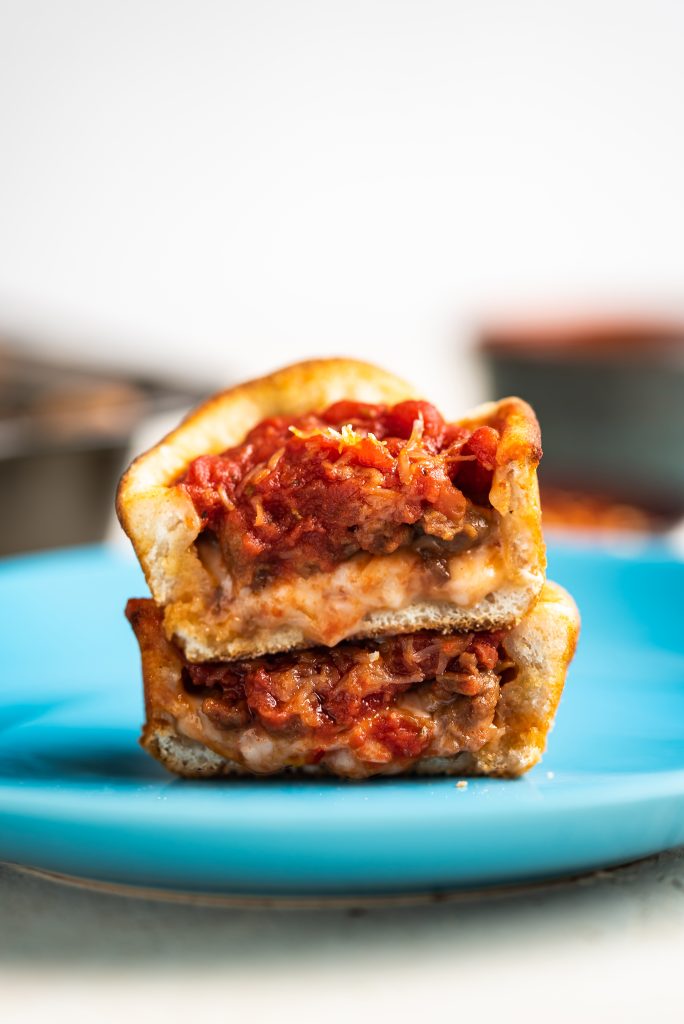 As always, I’d love to hear your thoughts on these Beyond Meat Chicago-Style Mini Pizzas if you make them. So drop me a comment below, and be sure to tag @nutfreevegan on social media if you’re posting photos. Plus, it’s always super fun to see these dishes out in the wild! 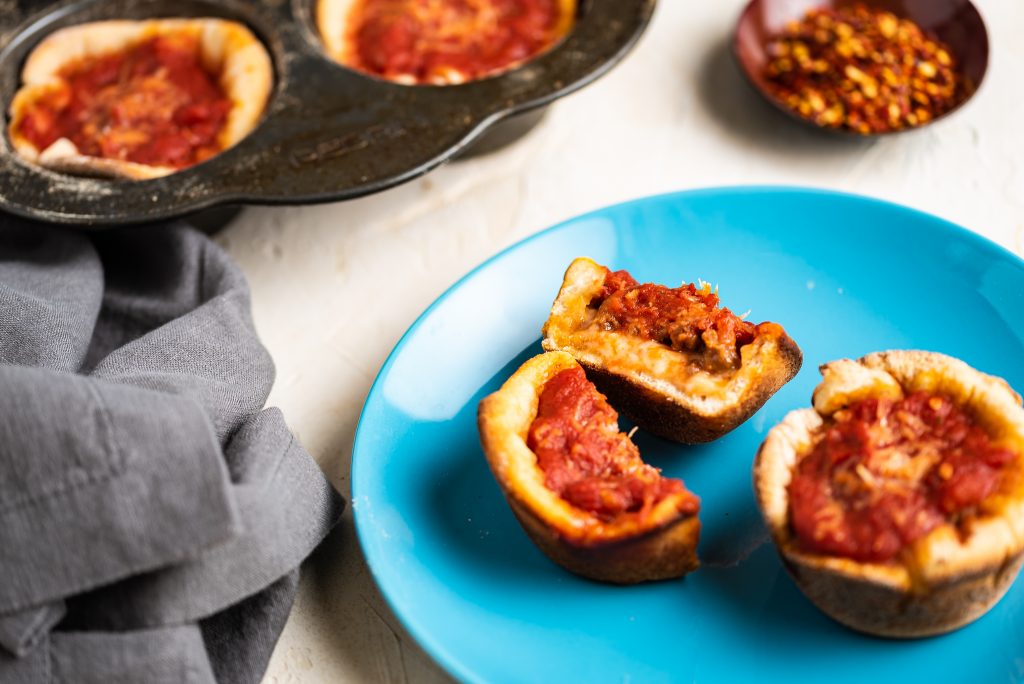 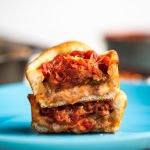 *Nutritional yeast makes a good substitution if you don’t have any plant-based parmesan on hand. You’ll probably have some leftover ingredients, so feel free to make another round of pizzas!