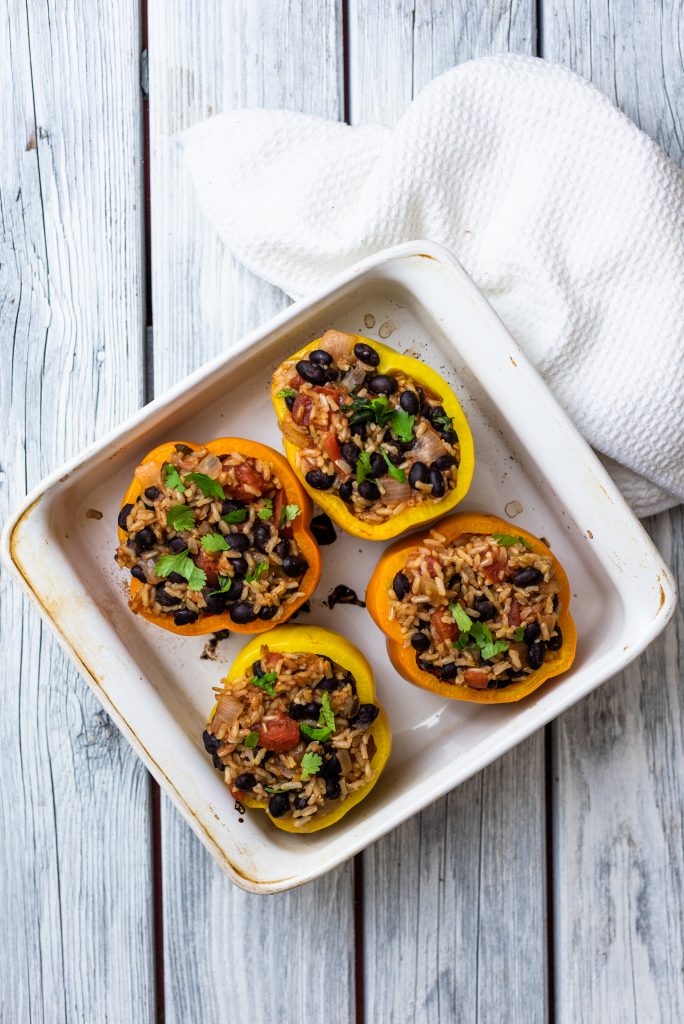 Wow. I just checked and my last post on the site was in July! I took an inadvertent summer hiatus to do a bunch of traveling, mostly revolving around me running races. Laura and I visited a lot of areas around the northeast: Philadelphia, Atlantic City, Connecticut and upstate New York (to visit the Catskill Animal Sanctuary!). We also drove to our friends’ wedding in Ohio last month, which was really fun. Even though I grew up in central Pennsylvania, I’d never visited there or western PA, so it was nice to finally do that (especially since, in Pittsburgh, I got to see Mr. Rogers’ sweater, his sneakers and all the original puppets from the show).

Now, as fall is beginning to make its presence felt, I’m back to what I hope will be a regular schedule with the site, posting once each week, and an extra recipe in my newsletter (which I encourage you to sign up for over on the right) that goes out monthly.

The first recipe I’m excited to share with you is for Soutwestern Stuffed Peppers. If you’re an avid reader of the site you’ll know that I’m obsessed with this area of the country. Laura and I got married in Santa Fe and we daydream about living there at some point. It’s just so beautiful and creative there. I’m also enamored with the food, which I do my best to recreate on this site more than just about any other cuisine. That’s why I thought it’d be a good idea to share something inspired by the Southwest upon my return. 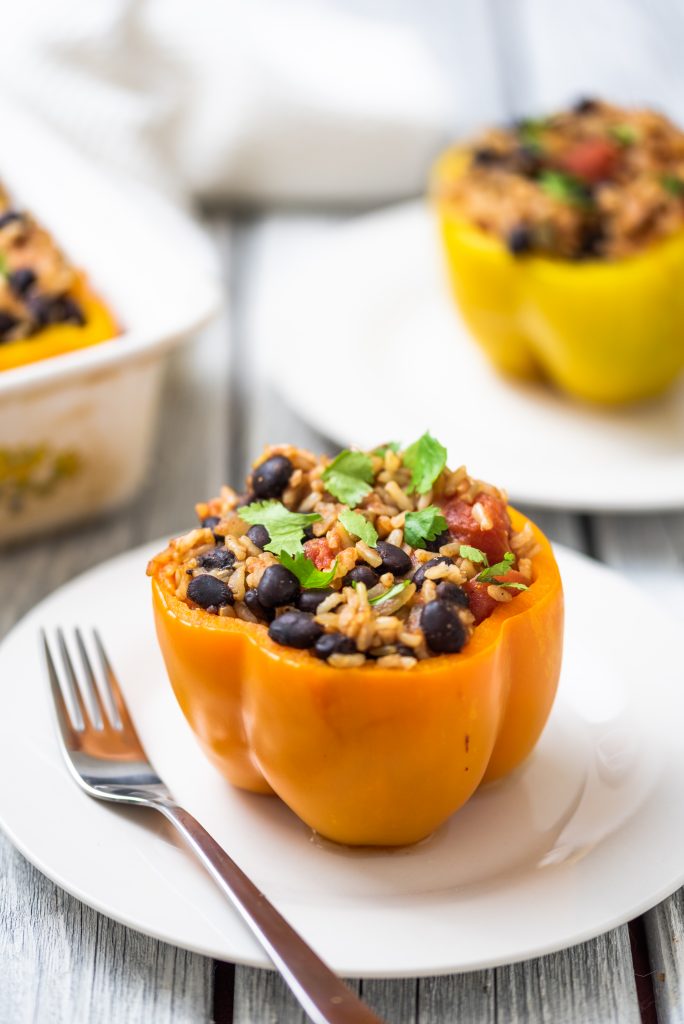 These stuffed peppers are really awesome. They’re full of rich flavors and—true to the area—have a little heat to them thanks to the chiles. And where many recipes I’ve seen for similar dishes call for beef as their protein, I opted for black beans instead.

To make these peppers you essentially cook up a beans and rice dish and then fill the peppers with it, bake, and that’s it. Super simple! And even though I kept this version pretty bare bones, there are a lot of variations you can try to carry on the Southwestern vibe. 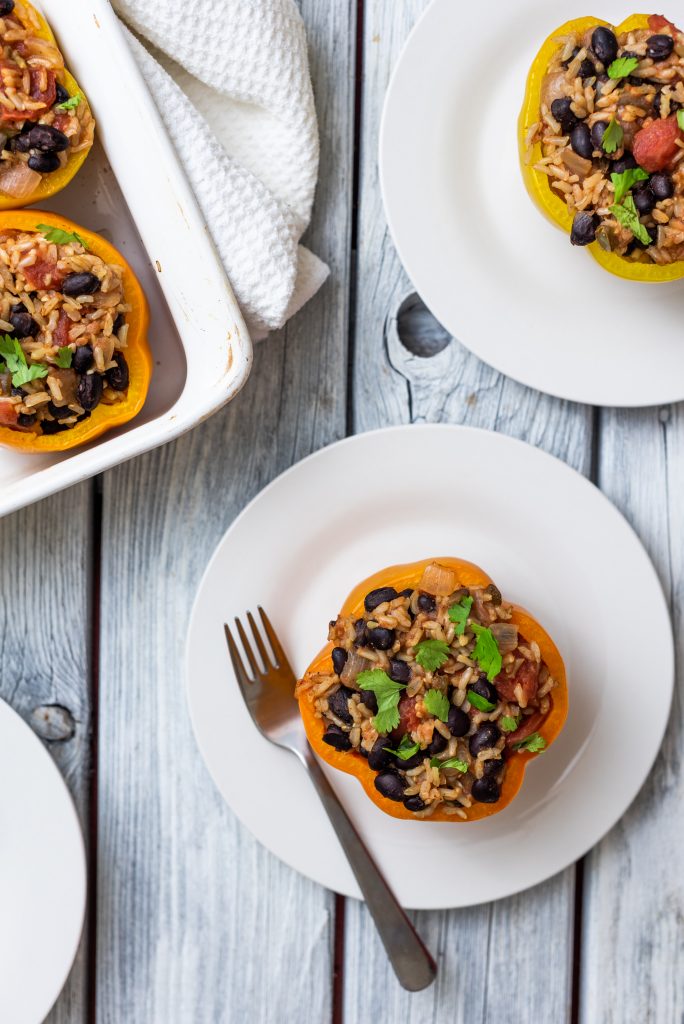 My version of these is simple because I’m trying to avoid too many processed products in my recipes now. But you can totally add something like the Beyond Meat or Impossible Foods ground “meat,” some vegan sour cream on top, or some dairy-free cheese shreds (add these on before covering with foil and putting in the oven).

That’s it! I’m super happy to be back and I really hope you love this recipe as much as I do. See you again very soon!

As always, I’d love to hear your thoughts on these Southwestern Stuffed Peppers if you make them. So drop me a comment below, and be sure to tag @nutfreevegan on social media if you’re posting photos. It’s always super fun to see these dishes out in the wild! 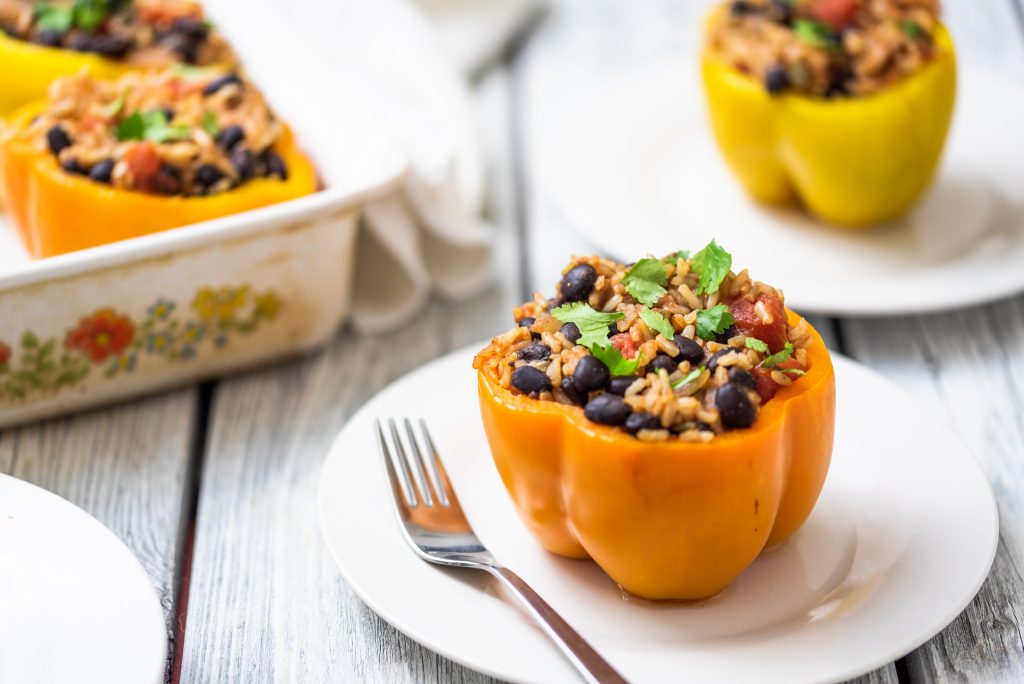 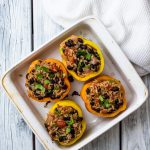 This recipe is gluten-free.
It can also be made oil-free if you omit the first ingredient and substitute vegetable broth, water or wine.